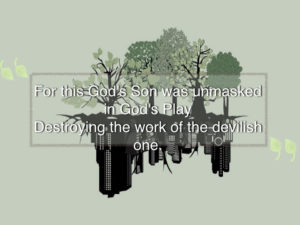 Little kids, be artless, be not naive

Listen not to the scoffer’s deceiving

tongue. Only right-doers are right,

For he who is righteous never does wrong

See only wrong-doers are wrong

For he known as devil can’t sing our new song

From the get-go he sinned, and ever will sin

For this God’s Son was unmasked in God’s Play

Destroying the works of the devilish one.

Those begotten of God never “will sin”

For a seed of the Son planted within

Roots out sin’s abilities, for he’s of God

And this is how children of God are unveiled

For this is how devilish children unclothe.