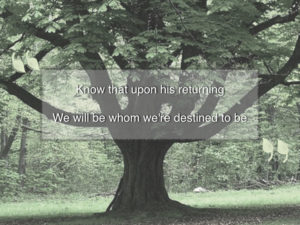 Why don’t people recognize us?

Why don’t they see with true eyes?

Why, we as sons, drink their spite and

Why, daughters, listen to lies?

The world and its spies doesn’t know us

The world, all its hype, doesn’t see

As long as they slander our King.

But we are the sons, we’re the daughters

What we will become, not the fodder,

When all is revealed, bridged the sea.

Know that upon his returning

We will be whom we’re destined to be

We will see who he is, ever turning

His children, from Abe “into me.”