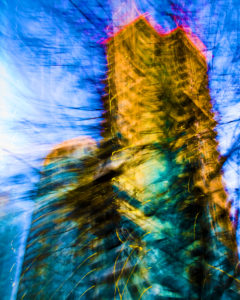 The 3 sons
of the righteous one
became many peoples,
populating and filling the earth
under the blessing they had received.

Commonality was found
by the one language and speech
which unified the people through
the mutuality of culture.

The people made the move east
and settled in the plains of Shinar,
thus far being obedient by fruitfully expanding
in accordance with the ordinance of God.

But using bricks for stone
and tar for mortar,
they set about building a monument
that would make their name immortal –
a city with a tower stretching to the heavens –
cementing their renown.

But the Lord came down and examined their work:
a structure without a proper foundation;
designed for self-glorification
instead of His glory,
with man as its builder and architect.

Furthermore,
his commission was ignored
as they gathered together as one
instead of spreading out
over the face of the earth.

The city and tower in Babel thwarted by
the babble of the confused
as the Creator intervened
with the outbreak of languages,
causing the crumbling of the commonality
once shared by the people.

They were
scattered across the span of the land
fulfilling the Almighty’s plan for man;
yet again,
only with His intervention
would His intentions come to maturity.