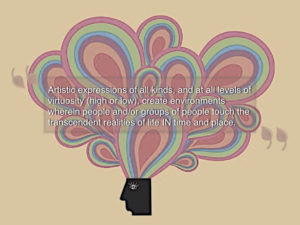 Evangelism that works is more than just spewing ‘correct’ biblical information; correct?  (Things like John 3:16, Romans 10:9 & 10, 1 Corinthians 15: 3-8.)  Certainly, the objective realities of these revealed truths must be present.  But their presence does not guarantee that the one(s) being evangelized will come to faith.

So let me press you to struggle with this reality:  evangelism, at its core, is not simply information transfer ABOUT God; it’s encounter WITH and response in faith and repentance, submission and surrender TO GOD.  Hmmm, that sounds a bit like worship as well, doesn’t it? But more on that later.  And that kind of evangelism is not mono-dimensional, it’s multi-dimensional; and yes, it’s certainly even mysterious, beyond our human capacity to fully understand all its realities.

So, to carry out that sort of biblical evangelism—for humans to encounter both the objective and experiential truth of ‘evangelism in play’—humans must enter into environments where they actually encounter the true and living, transcendent GOD.  And creating those ‘environments’ that make evangelism effective, so much of the time, requires artistic expression.

GOD has used Byron, since he surrendered his life to Christ’s service at age 19, as a musician, recording artist, published songwriter (ASCAP & NARAS), youth pastor, worship pastor, evangelist, church planter, senior pastor, Bible teacher, professor, and artists-in-missions strategist.byron tweet pic Dr. Spradlin is a graduate of Western Seminary, Portland, OR; with a Master of Divinity degree (heavy in Missions, and biblical languages); and there he was the co-founder of the Master of Church Music degree—which he also received there, and for which he served on adjunct faculty for two years in the late 1970’s. He also has done ThM studies (abd) at Fuller Seminary, Pasadena, CA; and in 2012, was awarded the Doctor of Ministry degree (in Worship Studies) from Liberty University’s Liberty Baptist Theological Seminary, Lynchburg, VA – where he has also teaches courses from time to time in the Worship Studies department. Also, he serves as the international Senior Associate for the ARTS for the global Lausanne Committee for World Evangelization. He is professor of Worship, Imagination & the Arts at Williamson College in Franklin TN (USA). He also serves as Vice-Board-Chair of the international Jews for Jesus mission, having previously served 35 years as Board Chair and the performance coach for their first music-evangelism team, The Liberated Wailing Wall; and, since 2014, he is serving on the Board of World Venture mission agency based in Denver, CO His ministry experience ranges through almost 50 nations, and from arts in evangelism, missions and ministry, to Jewish & Muslim Evangelism, to church planting, to worship ministry and coaching, and the theology of worship, imagination and the arts. His wife, Pam, and he have been married for since 1974; their two grown children are married, and they have four amazing grand children. Connect with Byron! Byron’s Blog: ByronSpradlin.ComByron at Podium Twitter: @byronspradlin Facebook: https://www.facebook.com/byronlspradlin/ YouTube: Byron’s YouTube Channel