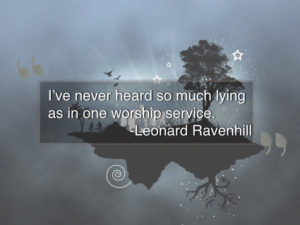 Back in September of 2006, I was listening to Jason Upton teach on worship at the Lifelight Music Festival in Sioux Falls. He said something that day that has inspired The Psalms Project concept ever since: “Bono (of U2 fame) once said, ‘I don’t listen to Gospel music because it isn’t honest. That’s why I listen to Nine Inch Nails.’”

After clarifying the fact that he didn’t necessarily agree with Bono’s solution to the lack of honesty in Gospel music, Upton went on to say, “You see, the problem is that honesty isn’t necessarily the truth, right? Honesty leads us to the truth. The reason the Psalms are so powerful is because they’re honest. What do you think will have more staying power 100 years from now: modern contemporary Christian music, or the Psalms? If I were a betting man, I’d bet on the Psalms.”

Obviously, I am not labeling all contemporary Christian music “dishonest” nor in any way claiming superiority over any other artist’s music. There’s a lot of anointed, powerful, honest Christian music out there, of which I am a big fan.

But I think Upton has a point: the lack of honesty in worship and in Christian contemporary music is a salient problem, and one of the results is lethargic worship.

Upton continued, “Jesus wants us to be with Him. And what does it mean to be present to God? It means to not be lying. Leonard Ravenhill once said, ‘I’ve never heard so much lying as in one worship service.’”

Extreme? Maybe, but the point is an important one. How many times in worship have we sung something akin to “Jesus, all I want to do is adore You” or “Everything I do is for Your glory” without fully meaning it, or even meaning it at all? What affect do you think such dishonesty has on the passion and depth of our worship?

The problem runs deeper than lyrics that cannot be sung truthfully. Dishonesty in songwriting also tends to result in lyrics that are shallow, uninspired, and vague. A wise writing professor once taught my class that “good writing is about specificity and detail.”

He couldn’t be more right.

Honesty in writing leads to detailed, moving, creative, theologically rich, and inspired lyrics. Dishonesty leads to the opposite: vague, bland, cliché, shallow, and uninspired lyrics. Too many worship songs fall in the latter category, even though the lyrical content is true and theologically Christ-exalting. The unpleasant fact is that many songs are simply manufactured. I’ve done it. Maybe we all have. They sound good, but ultimately, they usually fail to fully arrest the hearts of worshippers.

Very few modern worship songs have the power in the lyrics themselves to move the average churchgoer into deeply engaged worship without an ideal setup from the right sermon or the right testimony and the right worship band playing a powerful rendition of the song. This is partially a people problem (most churchgoers are not as in love with God as they should be), but it is also a lyrical problem.

Worship leaders cannot absolve themselves of all the responsibility for lethargic worship. The songs we choose and the words we sing matter.

Okay, it’s time for some examples. I love the honesty of the verse lyrics from the song “In the Silence” by Jason Upton: “I’m tired of telling You, ‘You have me’/When I know You really don’t/I’m tired of telling You I’ll follow/When I know I really won’t.” Such painfully honest lyrics grab us as worshippers and put us at attention: things are about to get real with God. No “playing church” here.

Many Christian songs speak about sin and struggles, but too often in vague, safe, impersonal terms that allow us to keep our more specific and immediate issues at a distance. Read Psalm 51 again. Look at how transparent and specific David is about the depths of his sin, his hatred for his sin, and his contrition over it. There’s a reason Psalm 51 resonates with us – all of us – at a deep, visceral level. It’s because it’s honest. He’s not prettying things up for church.

I also love the opening verse lyrics to the song “Beautiful Things” by Gungor: “All this pain/I wonder if I’ll ever find my way/I wonder if my life could really change at all.” This line expresses real, naked doubt. Too many songs give some mention of doubt without really being honest about what’s being doubted or just how deep it can run.

What I also love about both of those songs (and the Psalms) is that they don’t end with just hopeless honesty. They’re not just being whiny, cynical hipsters. The lyrics progress from honesty about sin and doubt to lyrics proclaiming truths about God and how He WILL make everything right again. Very seldom does praise arise from nowhere in the Psalms. It usually arises out of the ashes of pain, struggle, and doubt. This is where REAL JOY in worship comes from – the realization that NOTHING can separate us from His love, His joy, His abundant life. There’s more joy in the expression of God overcoming real human situations than in God overcoming, well, nothing very tangible. Truly authentic worship is characterized by joy, a joy that glorifies God and makes His goodness known.

In 1 Corinthians 14, Paul remarks that our worship should be so affecting that if an unbeliever walked in, he would fall to his knees and say, “God is here.” If we want maximum joy in our worship, we should desire honesty as its corollary and necessary complement. I cannot stress this enough: THE HONESTY SHOULD LEAD US TO THE TRUTH, WHICH LEADS US TO JOY. If worship doesn’t end with joy, it’s missing the point – and the heart of God (Psalm 16:11).

Ultimately, the job of the worship leader is to choose songs with lyrics that reflect the feelings and beliefs of the congregation at that moment. The real feelings and the real beliefs. You can tell when a song hits the congregation where they’re at, when a song hits a primal nerve, a truth about ourselves and especially about God that is both timely and profound. People are moved. People become more animated in worship. They engage spiritually, physically, and emotionally, which is Biblical (spiritually, physically, and emotionally involved worship is the norm in Scripture, particularly in the Psalms). If we want to see our congregations more passionately engaged in worship, we need to sing lyrics that are honest, detailed, moving, creative, and inspired. I don’t have time to get into poetic techniques for specificity such as metaphor, imagery, etc., but I will address those in an entry in the very near future.

The next time you choose a song for worship, ask yourself, “Is it honest? Did this come from someone’s gut, from a truly authentic experience, like the Psalms did from David’s?” You’ll see a difference in the way you and your congregation connect with God and each other together in worship, because worship is relational. And if it is relational, then we would do well to remember that the only path beyond lethargic and shallow relationships is honesty.