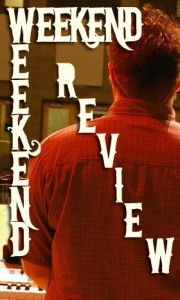 Do you ever have one of those feelings? You know, when you haven’t heard from your drummer all week, and an hour and a half before the rehearsal is supposed to start, you give them a call to confirm, and they’re out on the lake? Yeah….so…..

We had two different drummers, one for Saturday evening and one for Sunday morning. They both did great, especially considering the extremely little time they had to rehearse.

We had a full band this week, we had two acoustics. I’ll be splitting these guys up though. I had paired a new guy with one of our more seasoned-chord-fiends for a while to get his feet wet, but this weekend he reached the place where he was comptent on his own and the challenge of working a band with two acoustics outweighed the risks of putting him on his own. So, next time around, he’ll be on his own.

I have to confess, I haven’t been preparing as much for worship as I should have been. This week I did though, and it did pay off. Especially for my vocals. I still had my share of pitchy parts, but the whole was better than previous weeks. I just realized this week why my voice is so much weaker now than it was. Aside from all the sinus & Allergy problems I’ve been having, I’m not singing nearly as much. I used to have both choir and worship band rehearsal once a week, now I’m just down to worship rehearsal, so I’m not working my voice as much as I should. So, this week, I’ve been singing with a lot of Steven Curtis Chapman & doing vocal workouts as well, they’re both really paying off.

Here was our Set:

The sermon is part of our series on the Lord’s prayer. This week was about God providing our daily bread, being our source of life. We really focused on the “You are my Daily Bread.” portion of breathe and it really seemed to connect with people. Great weekend.