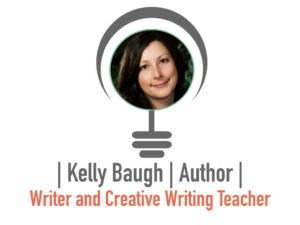 Kelly Baugh is a freelance and creative writer who lives in Fort Collins, Colorado with her husband, two children and two hyper huskies. She attended college at Taylor University where she received a degree in Sportsmedicine, with a minor in English Writing. After graduating, she and her husband trained with the humanitarian aid missions organization Youth with a Mission (YWAM) and served in countries such as Nepal, Morocco, Belgium and Kosovo. From 2001-2006 she was co-director of the YWAM Prishtina, Kosovo base.

After returning to America in 2006, Kelly became a full-time American mom, the most challenging position she has ever served in. It was in this capacity that Kelly’s relationship with God matured the most and that her creative writing career originated. Although she used her technical writing skills extensively during her time in YWAM, Kelly began her first novel in response to the vast array joys and challenges she experienced while raising two preschoolers. Through the training and support she received in the organization Northern Colorado Writers (NCW), Kelly has written several novels.

In YA paranormal thriller Valley of the Broken, Sage lives a quiet, reclusive life to avoid revealing her supernatural abilities. When a series of grisly crimes rocks her small mountain community, Sage perceives a connection between the malevolent force that stalks the mountains and the devastating tragedy she experienced as a child. With the help of several unlikely sidekicks, Sage must decide whether to fight an evil that goes even deeper than she could imagine; where nothing is as it seems, not even herself. Valley of the Broken is part of a seven book series inspired by the Seven Deadly Sins and Virtues and the people/cultures of the Four Corners region.

Women’s fiction Miss You Once Again, set in Eden Grove, Mississippi, is a story about family, love and second chances. The two main characters, Nana and Lee, are both strong women who face heartbreak and setbacks but don’t let those moments define them. Granny Bob’s Homestyle Cooking: Recipes With a Southern Flavor contains the regional recipes mentioned in Miss You Once Again, along with many other recipes gleaned from Kelly’s Southern relatives and friends.

Her books are available in paperback and Kindle on Amazon.

Facebook: The West, Now & Then: Articles and Books by K. F. Baugh

Kelly Baugh grew up as a true Colorado mountain girl and her adventures have taken her from war-torn Kosovo to the mountains of Nepal to the drama of the Terrible Twos and everything in between. These experiences have given her a rich reservoir of experiences and people to draw from in her writing. For the moment she resides in Colorado again with her husband, two children and two hyper huskies. You can find out more about her books at westnowthen.com