A Multi-Ethnic Worship Leader Is … Courageous 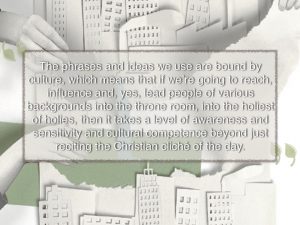 Courage is one of those attributes one normally associates with firefighters, police, and other public servants. Rarely do people call musicians courageous, unless they happen to be taking a particularly unpopular stance on a highly political issue. But I believe worship leaders in multi-ethnic contexts are often courageous. As a matter of fact, in order to be successful doing multi-ethnic worship music ministry, you must be courageous. In this kind of ministry, courage is not an optional add-on, it’s a necessary requirement.

This is partially true because of the nature of leading. Leadership happens from out in front. Effective leaders are never content to simply point or gesture from a safe distance. Rather, the person leading goes out in front of the people who are following behind. There’s usually an implicit agreement involved. I’ll follow you into a new territory, the unstated reasoning of the follower goes, as long as you’re willing to go there first. In that sense, worship leaders are sort of like tour guides, helping people to feel comfortable amidst the unknown and the uncomfortable. And let’s be honest – sometimes worship can be uncomfortable.

No matter what kind of church situation, no matter if the crowd is full of saints who’ve been walking with the Lord for decades, or full of folks that have no knowledge of church or Christ or worship… there’s something about leading worship that involves an element of the unknown. Anytime you attempt to transcend the worldly, natural physical plane and tap into something supernatural, it’s a little bit weird. This is why in evangelical Christian culture, worship leaders have adopted certain phrases and idioms to help wrap our minds around just what it is we’re doing. Things like “lift your hands as an act of surrender,” or “let’s invite the Holy Spirit in tonight,” or, “take some time to press in to what God is doing,” etc. Not that we’re making these up on our own, many of them come directly from the Scripture. It’s just that we have to come up with some language to overcome the basic disadvantage of having to lead people into an intangible realm. In that sense, it’s a lot harder than being a tour guide, because you can’t just say, “God the Father is in the middle, Jesus is on his right. Coming up on the left, is the Holy Spirit. Later this afternoon, Jesus will return for a segment we call the Apocalypse!” Obviously, it doesn’t work that way.

Up to this point, everything I’ve described is true of worship leaders in general. But then you add the multicultural angle, and you can see how it gets even more complicated. The phrases and ideas we use are bound by culture, which means that if we’re going to reach, influence and, yes, lead people of various backgrounds into the throne room, into the holiest of holies, then it takes a level of awareness and sensitivity and cultural competence beyond just reciting the Christian cliché of the day. After all, what may be a cliché to me could be a totally interesting fresh take to you, and vice versa. And then, on top of all that, there’s the actual music. This may vary depending on where you fall along Gerardo Marti’s four philosophies guiding musical selection, but if you’re leading worship in an ethnically diverse congregation, the way you approach the music can have a big impact on whether — and to what extent — the people follow your leading.

Even if you adopt the Pluralist mindset of high racial awareness and high musical diversity, as human beings we are limited in our capacity to be, as Paul said, all things to all people. A person’s musical outlook is framed and shaped by their cultural identity. Which means that anytime a person performs a style of music perceived as outside his or her native culture, that person becomes a potential lightning rod for criticism.  And so, if we try to flex our cultural competency muscles too much by trying to appease too many disparate groups through musical selections, we can cause more harm than good. By attempting to please everyone, we often please no one. Which is not to say there’s anything wrong with using a diverse array of musical forms in worship. On the contrary, I am a hearty advocate of diversity of styles in worship music. But it’s important to understand the risks and challenges of the role before you step into it. And if it’s true for firefighters and police officers, it’s true for worship leaders.

Because running a multi-ethnic worship ministry is not for the faint of heart. As I mentioned, it requires cultural competency, to help you relate to people of various backgrounds. It requires being connected and keyed into the overall leadership and vision of the church, which may require relational investment with pastors, church board members, committee members, and lay leaders. It requires actually knowing and reading and believing God’s Word, not just cursorily but thoroughly, so you can connect the themes and ideas in the Bible with the prevailing musical and cultural trends of the day, which will help your music function as an effective complement to the message being preached. And it requires you to rest on the strength of your convictions, of the calling and equipping process that placed you in the role, and of the God who makes the whole thing go.

(This article was written by Jelani Greenidge for Proskuneo Ministries of which Josh Davis is the Founder and our vetted contributor to Worship Ministry Catalyst. A native of the Pacific Northwest, Jelani Greenidge is a dynamic communicator with a drive to inform, inflame, and inspire. A product of a large musical family, Jelani has been engaging audiences and readers for well over two decades with a stylized blend of urban intellect, incisive commentary, and practical theology.

He is an educational and motivational speaker, songwriter/arranger, producer/emcee, regular columnist for UrbanFaith.com, and the founder of Motif Worship, a resource of keyboard-driven worship leaders. www.jelanigreenidge.com).

Josh Davis is the Founder and Executive Director of Proskuneo Ministries. He is a multi-ethnic worship leader, clinician, songwriter, ordained minister, and music missionary. A third-culture person himself, Josh served as a missionary to the Dominican Republic before founding Proskuneo Ministries (www.proskuneo.org), a ministry that exists to bring nations together in worship on earth as it is in heaven. Josh is the co-author of the book “Worship Together [in your church as in heaven].” In his spare time, Josh loves to jog, learn languages, and drink coffee. Josh lives with his wife and four children in Clarkston, GA where over 60 languages are spoken in a 1.5 mile radius.