Responsorial Psalm 118: This Is the Day the Lord Has Made!

Home » Books of the Bible » Responsorial Psalm 118: This Is the Day the Lord Has Made! 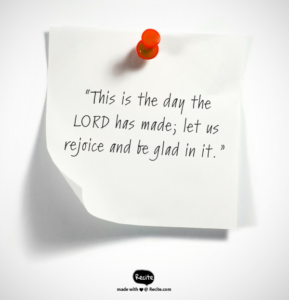 Let me begin by saying, “Buckle your seat belts–the holiday season is officially upon us.” While it’s easy to be immediately sucked into Christmas plans, gifts and decorations, Thanksgiving is a holiday that I choose to engage in, even if it has a smaller bling factor. Thanksgiving centers us in reflection and gratefulness. The Psalms, specially Psalm 118, offer practical words and actions we can use to cultivate a season of thankfulness in our hearts.

Psalm 118 has been described as “a thanksgiving liturgy accompanying a procession of the king and the people into the Temple precincts.”*  Note the phrase “and the people”: only a good king takes his people with him into the holiest place of worship (which was the Temple in ancient Israel).  It’s also worthwhile to note that many commentators speculate the king spoken of in this psalm is the principal psalmist himself, King David.

The opening four verses comprise a litany of praise extolling the goodness and everlasting mercy of the LORD, and, hence, the people of Israel’s rightful response to give thanks to Him. Midway through the psalm the writer recounts the sovereign power of the LORD’s “right hand” that has delivered His people from death (vv. 15-16).  The psalmist then boldly declares in verse 17, “I shall not die but live and declare the works of the LORD.”

A few verses later (vv. 22-23) he exults in the power of God being being shown in what man deems insignificant: “The stone the builders rejected has become the cornerstone. By the LORD has this been done; it is wonderful in our eyes.”  The display of the LORD’s “upside down” method of using the small things of this world to display His great power overflows into an exhortation in the following verse: “This is the day the LORD has made; let us rejoice and be glad in it.”

The themes of gratitude and a kingly procession make it easy to see why many faith traditions employ this psalm on Easter Sunday.  Looking backward we saw a good king, David, processing into the Temple gates.  Now let’s look Christward at the ultimate King, born from the line of David, who rules every nation with justice and whose mercy endures forever.

This King was crucified, was buried, and rose again, leading His people in a royal procession out of death and into new life.  This King, to quote the apostle Peter, is “the stone rejected by the builders, which has become the cornerstone” (Acts 4:11), and King Jesus Himself quotes Psalm 118:22-23 in Matthew 21:42.  Peter revisits this imagery in his second epistle and describes Christ as “a living stone rejected by men but in the sight of God chosen and precious” (1 Peter 2:4).  Psalm 118 prophetically anticipates the coming of the Cornerstone, the Rock of our salvation who is alive and well, ruling and reigning at the right hand of the Father.

So how do we move forward with gratitude for the LORD’s enduring mercies, trust in His right hand of power that delivers us from death to life, and confidence in the Cornerstone that’s often rejected by men?  Let’s go back to 1 Peter 2 for the answer.  Verse 5 says, “you yourselves like living stones are being built up as a spiritual house, to be a holy priesthood, to offer spiritual sacrifices acceptable to God through Jesus Christ.”  Not only is Christ a living stone; we are, too.  Remember: a good king takes his people with him into true worship.

In verse 9 Peter says, “But you are a chosen race, a royal priesthood, a holy nation, a people for his own possession, that you may proclaim the excellencies of him who called you out of darkness into his marvelous light.”  Christ, the royal High Priest, allows us to share in His royal priesthood.  Why?  So that, as the psalmist says in Psalm 118, we may declare the marvelous works of the LORD.  Don’t be shy—go out and proclaim His excellencies!  1 Peter 2:10 states, “Once you were not a people, but now you are God’s people; once you had not received mercy, but now you have received mercy.”  You no longer live in the once; you live in the now.  Today is the day the LORD has made—so go on and rejoice and be glad in it!

Jeremy Mayfield is a Jesus-lovin’, psalm-singin’ freelance musician who currently resides in Nashville, where he bides his time as a composer/arranger/live musician/session player/songwriter. He is the founder of singapsalm.com, which he hopes will be a resource hub for any fellow psalm lovers in need of inspiring musical settings to the inspired words of Sacred Scripture. Jeremy is also the founder & president of Unsung, a charitable organization that exists to tell the untold stories of unsung heroes by shining a light on the ‘Dynamic Transcendentals’ of Truth, Beauty, and Goodness that are often overshadowed in this dark world. Find out more here: http://unsunglife.com. Jeremy is husband to Jesse and father to Levi, Abel, and Vera.