The Day I Walked Away From My Church

Home » Featured » The Day I Walked Away From My Church 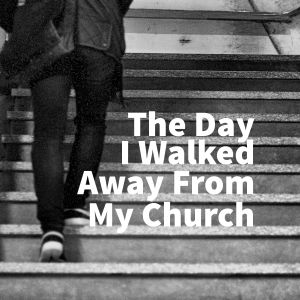 Our small church in a Pennsylvania river town had been losing people steadily for months, people who included our senior pastor and our associate pastor, not to mention dozens of others. Why that happened is a long story — too long for this space. But those that remained gathered on a chilly December morning to worship together one last time before our church was dissolved and all our assets were turned over to a megachurch from out of town, who planned to turn our building into a satellite campus.

I stood on the platform, as I had done hundreds of times over the past decade, singing songs to lead God’s people in worship. Despite repeated questions, I had no idea at this point if the incoming church had any interest in using me in worship ministry. The church had advertised for a campus pastor, a campus tech director, and a campus children’s ministry director, but information surrounding the position of worship leader remained strangely silent.

By this time, our churches had been in talks for the better part of a year, so I held out little hope that they planned to use me. Still, nothing had been set in stone, and even before the service that morning, people were asking me if I would be leading worship after the transition. No one on my team knew if they’d be involved, either.

After a few songs, we took a break from the music and did announcements, as we usually did. I didn’t have many announcements that morning, seeing as it was our last service. When I finished, one of the pastors from the incoming church came up to fill us in on the final details of the coming transition.

You can imagine my surprise when he announced, quite casually, that they had a “great worship team” lined up, complete with a new worship leader.

I can’t rightfully argue with their decision not to make me their worship leader. After all, in their eyes, I was part of the “old guard,” part of a church that failed to thrive and needed to call for outside help. But there’s a right way and a wrong way to let people know that their time in ministry is over. I think it’s safe to say that doing so onstage, during a service, with no warning at all is the wrong way. I’d be hard pressed to think of a worse way, when it comes down to it.

There I stood, guitar in hand, with most of the service still to go, as the man just a few feet away announced to me and to the people I’d been leading in worship for ten years that there was no place for me in the new order. I wanted to walk off the stage and out the door. But the service wasn’t done, and I was determined to finish well.

The rest of that morning is honestly kind of a blur for me. I remember closing with “God Of This City” and I remember several people thanking me for my years of service while they looked at me with sympathetic eyes. And I remember handing my church key to one of the elders.

He seemed surprised. “Don’t you need this anymore?” he asked.

I kept my cool. I didn’t make a scene or angrily storm out or anything like that.

I just calmly walked out the door. And I never set foot in that building again.

So why did I tell you this story? Was it just to complain or generate sympathy? No, not at all. I told you this story for two reasons.

First, I think there’s a valuable lesson for church leaders here. Don’t be careless with people’s feelings. What may be a minor thing to you might be everything to someone else. It may be a small thing to you to casually dismiss a former ministry leader, but it’s probably not a small thing to the person being dismissed.

Second, for ministry leaders: don’t define yourself by your ministry. You’re more than what you do at church. And your value to God doesn’t depend on your title. I learned this lesson the hard way.